A History of the Capitol

The Capitol Theatre, designated as a National Historic Site in 2016, debuted in 1930 as a premium Canadian entertainment venue.

Built at the beginning of the Great Depression in a rural community, the theatre is known as a “rare architectural gem” inspired by Hollywood that marks the “beginning of an era” in Canada’s entertainment history.

Built at the dawn of the sound film era, any theatre of this vintage might be expected to evoke the social, political and economic conditions of the decade. Yet the theatre was built at the cost of $80,000.00 and designed by the former President of the Ontario Association of Architects. The building was the first to use steel girders in its construction and at a time in history where many budgets were being slashed, the Capitol theatre did not spare any expense to ensure long-lasting, innovative results.

The Capitol is exceptionally well preserved with much of its original exterior and interior detail remaining after eighty years of almost continuous operation. As one of the last remaining North American examples of an “atmospheric” theatre space, the Capitol is an outstanding illustration of the era of its origins. 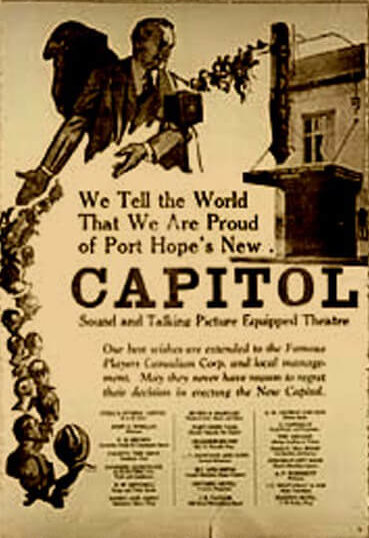 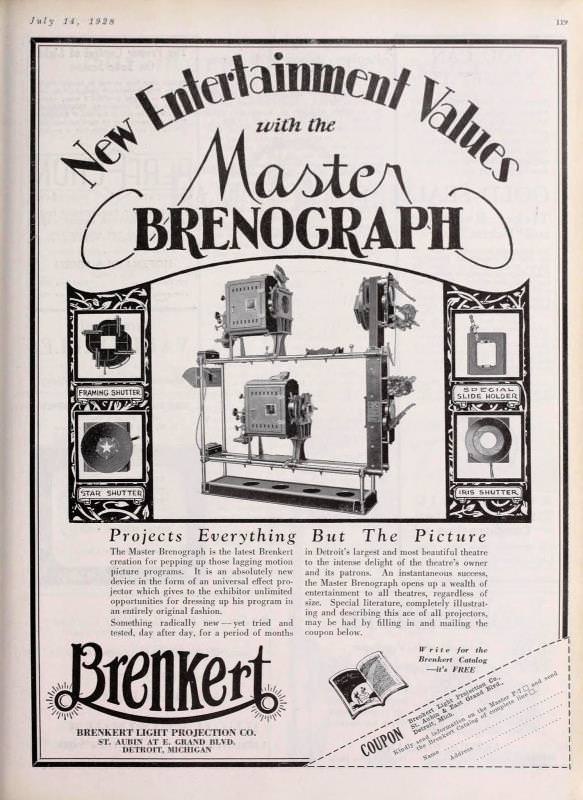 Atmospheric Theatre and The Brenograph

The Brenograph was one of many hallmarks attributed to the atmospheric theatre experience. The machine was used by theatres to project clouds over ceilings painted blue to simulate an “outdoor” effect.

In addition to the cutting-edge Brenograph effects, The Capitol incorporated other “low cost, highly visual” techniques to create an outdoor, medieval atmosphere for patrons to enjoy. A twilight sky, hanging vines, forest murals and castellated battlements added to the illusion and can still be found in the theatre today.

During the early years, the Capitol boasted two Brenograph Junior cloud projectors, each hidden from view behind foliage high up on the castle walls of the auditorium. The two motor driven units projected a slowly rotating series of images of clouds on the midnight blue plaster ceiling of the auditorium, completing the courtyard effect and creating an atmosphere where the audience waited like members of a royal court attending a command performance.

The Art Deco influence of the 1930s can be seen in the theatre’s paint colours, stencil work, furnishings, and fine details found in both the lobby and auditorium. During the theatre’s restoration period, a drive to preserve as much of the Art Deco style ensured that these depression-era elements were not lost.

In 1987, after years of operation as a modernized movie theatre, The Capitol was closed. A group, named the Capitol Theatre Foundation, formed in 1993 to begin restoration of the historic site. Photographs provided a record of the original theatre that assisted in the museum-quality restoration of the interior and exterior of the building. The theatre was re-opened in the summer of 1995 with necessary upgrades to become a multi-purpose theatre rather than just a movie theatre. After re-opening the theatre became a year-round performing arts facility and movie theatre that has continued to flourish to this day.

The Capitol Theatre Foundation board purchased the neighbouring property on Queen Street when it became available. In April 2003 construction began to create the Capitol Arts Centre and expand the theatre site. The building integrates the historic Capitol Theatre with an addition that houses a spacious box office, licensed reception area, additional washrooms, the Sculthorpe Studio Theatre, and an adjacent green room. The addition also allowed the theatre to make necessary upgrades to become completely handicap accessible.