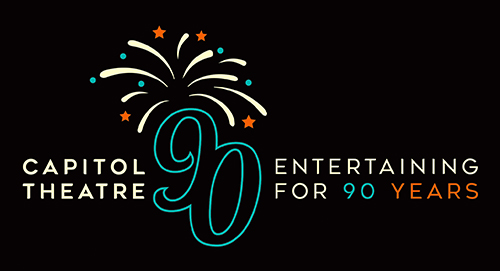 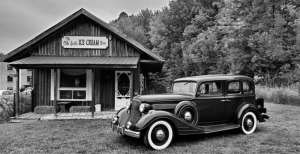 PARADE OF THE DECADES

Travel back in time as members of The Antique & Classic Car Club of Canada, decked out in accessories provided by Northumberland Players Costume House, parade their beautiful classic cars representing each decade from 1930 to the present day through downtown Port Hope. If you miss the parade please note that the cars will be parked on Queen Street for the duration of the day.  Please see below for the parade route. The parade is scheduled to arrive at the Capitol at 11:00am. Click the map to enlarge. 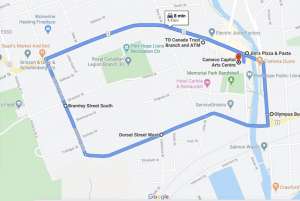 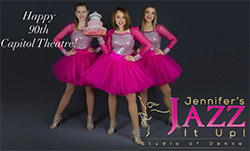 On behalf of JJIU we would like to congratulate the Cameco Capitol Arts Center on this huge milestone. The Capitol is an iconic landmark within our beautiful downtown cityscape.

At JJIU we hold the theatre near and dear to our hearts as we have created so many amazing memories on the Capitol stage. Year after year hosting our shows and events in this beautiful space. Today we are happy to be apart of this celebration,  create more memories, support our fellow community members, and entertain supporters and add a little JJIU sparkle to your day!  Cheers to 90 more!

Gabi Epstein — Born and raised in Toronto, Gabi is one of Canada’s leading stage and cabaret performers best known for playing Audrey in the 2019 Stratford Festival production of Little Shop of Horrors. For the Capitol Theatre: Tzeitel in Fiddler on the Roof, Aquata in The Little Mermaid. Other favourites: Fanny Brice in Funny Girl (Segal/HGJT); standby for Girl in Once (Mirvish— DORA Ensemble/Production);  Ensemble/U/S Mrs. Wilkinson in Billy Elliot, The House of Martin Guerre (Stratford Festival); Prom Queen (Segal Centre); Yitzhak in Hedwig and the Angry Inch and Paquette/Old Lady in Candide, (TIFT); Killer Queen in We Will Rock You (Magnus); To Life (HGJT— DORA nomination, Outstanding Performance); Blood Brothers, The Sound of Music, Perfect Wedding (Drayton); Edges (Musical Stage) as well as various Disney princesses including Belle and Ariel and Bo Peep aboard Disney Cruise Lines and in their original company of Toy Story the Musical. Gabi’s CD Show Off is available on Spotify/iTunes and her “Gabarets” have been performed all over North America garnering her praise such as “Best Cabaret of the Year” by the Times Square Chronicles in NYC. Her show “Gabs Sings Babs: Gabi Epstein sings the songs of Barbra Streisand” debuted at the Toronto Jazz Fest and has been performed all over Ontario and Quebec. Along with her husband, Jeremy Lapalme she is the co-founder/creator of “The New Local: Dine In Sing Out!” which partners with local restaurants to bring you virtual dinner&show experiences. Follow @the.new.local on Instagram and visit gabiepstein.com/news for more info.

Jeremy Lapalme — Over the past 12 years, Jeremy has made a reputation for himself as one of Canada’s top comedic performers appearing in plays and musicals across both the GTA and the country. For the Capitol: Chef Louis in The Little Mermaid and Mordcha in Fiddler on the Roof. Other theatrical credits include: Seymour in Little Shop of Horrors, Charlie Brown in You’re a good man, Charlie Brown, Lysander in A Midsummer Nights Dream among other shows with the Rose Theatre, 80s Solid Gold, Spamalot, Young Frankenstein, Drinking Habits, and A Gentleman’s Guide to Love and Murder. (Betty nom. Best Production) at Stage West Calgary and shows with theatres across Ontario including the Orillia Opera House, Theatre Orangeville, Magnus Theatre, and work at the Toronto Fringe Festival.

As well as being a performer, Jeremy has been instrumental in the creation of new comedic works with his dear friends at Bain and Bernard Comedy where they specialize in vaudeville-style and parody. Some of their works include: The You’ve Never Seen Anything Like It Show!!, Sherlock Holmes and the Case of Hamlet, and Romeo and Juliet: Chainsaw Massacre (Best of Fringe pick). Along with his wife, Gabi Epstein he is a co-founder/creator of “The New Local: Dine In Sing Out!” which partners with local restaurants to bring you virtual dinner&show experiences. Follow @the.new.local on Instagram and visit gabiepstein.com/news for more info.

Jeremy is a proud graduate of both the performing arts program at Wexford School of the Arts and Sheridan College’s prestigious Musical Theatre Performance program.

Working by day as a bookkeeper and freelancing as a piano tuner, copy editor, and administrator, Kate’s passion is playing bagpipes. She pipes with local bands and also solos for everything from intimate garden parties to large community celebrations. Evenings find her piping down the sun by the lighthouse on Presqu’ile Point. 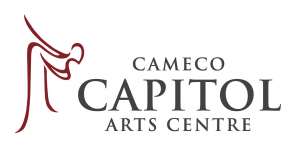 Join us for remarks from special guests, MP Lawrence, MPP Piccini, and Mayor Sanderson to officially mark the start of the Capitol Theatre’s 10th decade.

David has been a professional actor in Canada for the last 20 years. Selected theatre credits: Sky Masterson in Guys and Dolls, Tevye in Fiddler of the Roof, Henry Higgins in My Fair Lady (Port Hope); Prairie Nurse (Lighthouse Theatre);Vigilante (Catalyst, National Tour); Sherlock Holmes in Baskerville (Stage West); One For The Pot, Run for Your Wife, Perfect Wedding (Drayton); It’s A Wonderful Life (Theatre Aquarius, Persephone, Chemainus); Art, Billy Bishop Goes to War, The Girl in The Goldfish Bowl (Theatre Northwest); The Comedy of Errors, The Importance of Being Earnest, Miracle on 34th Street (Neptune Theatre); A Few Good Men (Citadel/RMTC); The 39 Steps, Cinderella (Globe Theatre); Little Women, The Three Musketeers (Citadel Theatre); Guys and Dolls (Chemainus); Little Shop of Horrors (Persephone); An Ideal Husband, The Fantasticks (Theatre Calgary); MMLJWW (Mirvish); Hamlet, The Taming of The Shrew, All’s Well That Ends Well (Stratford Festival); seven season with the Shaw Festival, favourites include The Importance of Being Earnest, Major Barbara and Happy End. Directing credits include: I Love You…Now Change, A Closer Walk with Patsy Cline (Souris Valley Theatre); If I Weren’t With You (Lunchbox Theatre). Selected Film and TV: Murdoch Mysteries. David is a part-time instructor at Sheridan College in Shakespeare and Chekhov, and has taught for The Stratford Festival, University of Regina and the Calgary Actor’s Studio. David holds a BFA from the University of Regina, a Certificate in Arts Education from York University/Stratford Festival, and was a participant in the Banff/Citadel Program, 2011.

Kent Sheridan is a Canadian Theatre (Dirty Dancing, Chicago, Rock of Ages) and television actor (Donovan Wiley on “Chesapeake Shores”), who has appeared at the Capitol Theatre several times over the past few years. Perhaps his favourite appearance here was as “Sam Carmichael” in “Mamma Mia” during the summer of 2016. He and the Hurst Brothers, Mitch (guitar), and Shawn (bass and vocals) are part of a larger acoustic blues group called “Yazoo Delta”, who, as the name suggests, play some old Delta Blues as well as bluesy and bluegrass acoustic arrangements of some classic rock, southern rock, and R&B songs. They have played together for many many years in clubs and other venues throughout Ontario.”Yazoo” has played a couple of cast parties in the last few years and are thrilled to be here to support the Capitol on this, it’s 90th birthday!